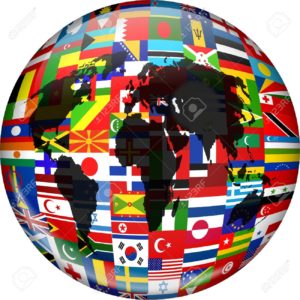 Article 38(1) of the Statute of the International Court of Justice sets out three forms of international law, which is either through conventions, custom, or general legal principles.  A treaty requires a state to voluntarily consent to signing and ratifying the treaty to become obligated.  Custom is derived from general customary conduct and practice of states along with opinio juris meaning that custom is established by a domestic existing legal obligation either through legislation or judicial opinion.  Evidence of state behavior, scholarly articles, and judicial opinions of international courts assist in proving custom.

International law is implicated in many sectors, such as trade, the environment, the law of the sea, labor, territory, development and finance, and human rights.

“Wherever men and women are persecuted because of their race, religion, or political views, that place must — at that moment — become the center of the universe.” ― Elie Wiesel

Human rights and collective peoples’ rights on the international stage are found codified in treaties, domestically, or in customary international law.  The Universal Declaration of Human Rights (UDHR) adopted by the United Nations General Assembly on December 10, 1948 following the close of World War II is a non-binding form of customary international law, which establishes norms that set forth universal individual concepts and rights.  The UDHR stands for the concepts of dignity, liberty, and equality.  Certain rights in the UDHR include, but is not limited to, the right to life, freedoms of thought and opinion, religion and conscious, peaceful association, and the prohibition of slavery and torture.  In addition to the UDHR, the adoption in 1966 of the International Convention on Civil and Political Rights and the International Convention of Economic, Social and Cultural Rights set forth enhanced specific rights and protections afforded individuals.  These three human rights instruments form what is commonly referred to as the International Bill of Human Rights.  Other core human rights instruments include, but are not limited to, the following:

There also exists regional systems of human rights instruments, which extend and enhance the human rights of individuals found within these territories and which include the following:

HOW IS INTERNATIONAL LAW ENFORCED?

International law is enforced either on the domestic level, through international bodies, such as the United Nations, or through international courts, such as the International Criminal Court (ICC) and the International Court of Justice (ICJ).  Of note, a country may only submit to the jurisdiction of a international court by agreement, such as domestically assenting, typically through legislative vote, to be a signatory to a treaty conveying jurisdiction.  For example, signatory countries to the Treaty of Rome consent to jurisdiction of the International Criminal Court.  The United States signed the Treaty of Rome on December 31, 2000, but it has not ratified the treaty. Under the treaty, a country is not bound, if it has signed but ratified the treaty and “made its intention clear not to become a party to the treaty.”  The United States has informed the United Nations Secretary General that it no longer intends to become a party to the treaty and therefore is not bound by the treaty.  The ICJ entertains legal disputes only between countries and does not entertain jurisdiction over individuals, non-government organizations, companies, or other private entities.

The Organization of American States (OAS) comprises 35 member states and is a supranational body based in Washington, DC. The Inter-American Commission on Human Rights (IACHR) is an autonomous organ of the OAS, also based in Washington, D.C.  Along with the Inter-American Court of Human Rights based in San José, Costa Rica,  The organization is a permanent body which meets in regular and special sessions several times a year to examine allegations of human rights violations in the continents of North America and South America. Its human rights duties stem from three documents, which include:

The Inter-American Court of Human Rights was established in 1979 with the purpose of enforcing and interpreting the provisions of the American Convention on Human Rights. The court can entertain cases of human rights violations by way of petition or referral.

The European Convention on Human Rights has since 1950 defined and guaranteed human rights and fundamental freedoms in Europe.  All 47 member states of the Council of Europe have signed this Convention, and are therefore under the jurisdiction of the European Court of Human Rights in Strasbourg.

The Council of Europe has also adopted the following:

The European Court of Human Rights is the only international court with jurisdiction to deal with cases brought by individuals rather than states.

Attorney Brian M. Knowles is an admitted Solicitor to the Senior Courts of England and Wales.  Also, Mr. Knowles is admitted to practice law in the State of South Carolina and Washington, D.C.  Knowles Law Firm, PC can assist in providing legal advice on international law issues and concerns, in particular those related to cross-border disputes and human rights.

If you or a loved one requires legal advice involving international law, please contacts us.